“Ryder’s characters reassured us that the meek will inherit the Earth if they wait long enough and are pure of heart. They promised a life beyond our teenage ennui.” 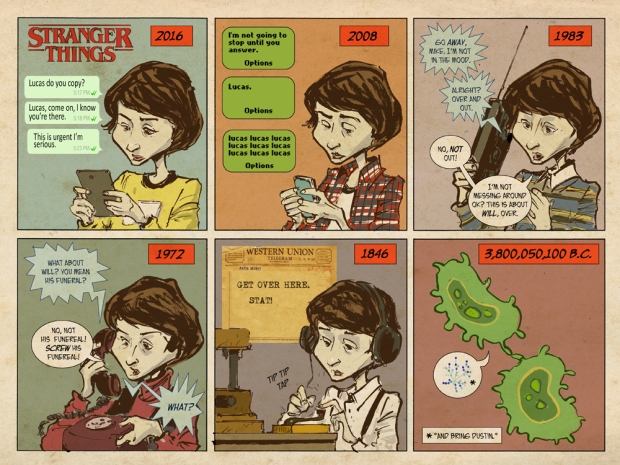 Inspired by this Guardian article’s comments: “One likely reason for this flight to the past is the obstacle that modern technology poses to plot lines. Mobile phones, the internet and widespread CCTV have made contemporary mystery stories increasingly hard to write. An interesting exercise for viewers of the opening episode of Stranger Things is to imagine how the vanishing of Will Byers might have been achieved so mysteriously if he were carrying a cellphone.”

Watched Netflix’s 80s nostalgia fest Stranger Things last week, and had the sometimes-occuring whim to do some comics inspired by the show.

It was probably Joy Division and Echo and the Bunnymen on the soundtrack that gave it the icing and the cherry :p

The Art of Charlie Chan Hock won the Singapore Literature Prize in the English Fiction category on July 14! (See a facebook post here)

It’s the first graphic novel to win the award, and there was also the Book of the Year and Cover of the Year awards at the Singapore Book Awards back in May.

There’s a website you can visit for reviews, pinups and more – click on the image above or this link below:)

I’ll be in the US next month to promote The Art of Charlie Chan Hock Chye and the new Doc Fate trade. It starts in NYC and then crosses over to San Francisco, Los Angeles and Seattle, before heading to Dallas and Arkansas 🙂 With a visit to RISD to boot!

For more info on the events:

Hoping to crowd source for information on Singapore’s Comics History 🙂

The link above leads to a Google Doc that anyone can add suggestions and comments to. Please help fill in things you feel are missing or erroneous 🙂

With feedback  from fans, creators, publishers and more, hpoefuly we can have a more inclusive history of local comics 🙂

ps: The categories and placements are all tentative, we’ll reoragnise things once we have more information at hand 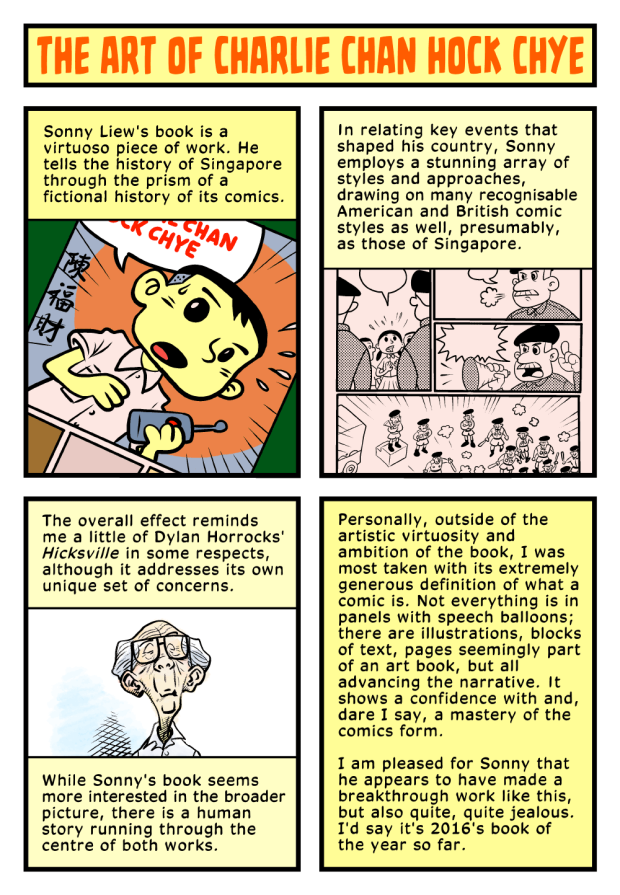 I’ve never met Roger Langridge* – though somehow ours paths have crossed over time. Above is his pinup/review for The Art of Charlie Chan Hock Chye, which he did with Manga Studio for the first time 🙂

I first encountered his work when I bought a copy of Fred the Clown, and there was an energy and style that reminded me of the Beano and Dandy cartoons I loved growing up (my mom would buy them from a bookstore in Seremban and me and my sis would copy pictures off ’em, Dennis the Menace, Billy Whizz, Roger the Dodger, the Bash Streets Boys and on and on) 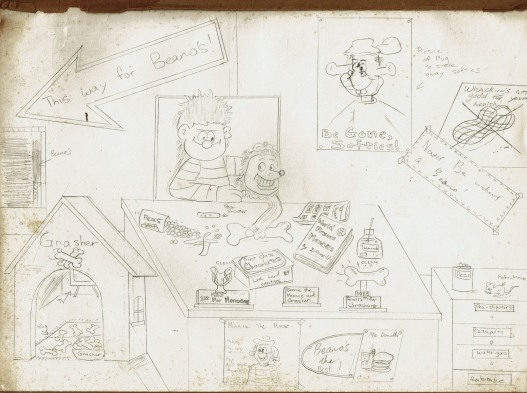 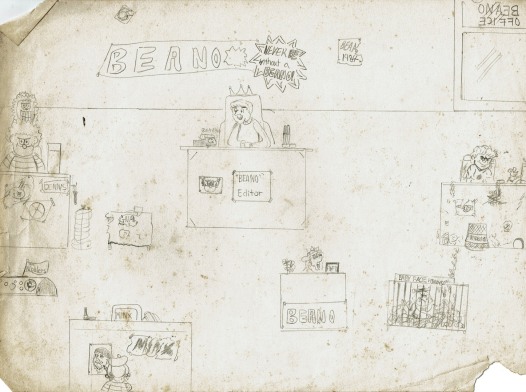 (Beano fanart by me)

For some reason Marvel comics put us together for a Spiderman short called “Nightmare Commute” in 2010, and it was one of those odd moments when you find yourself in contact with someone’s work you’d read and assumed would always be at that author-reader distance. (Another was working with Marc Hempel on My Faith in Frankie, having read  Gregory) 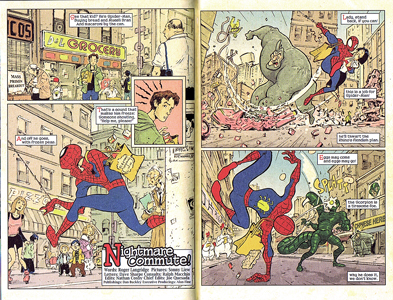 After that, I’d ask  Roger to do pinups to help promote Malinky Robot and The Shadow Hero as well, and he’s always game despite his busy schedule.

And I got the chance to sort of return the favour with an alternative cover for his series Abigail and the Snowman a couple of years back. 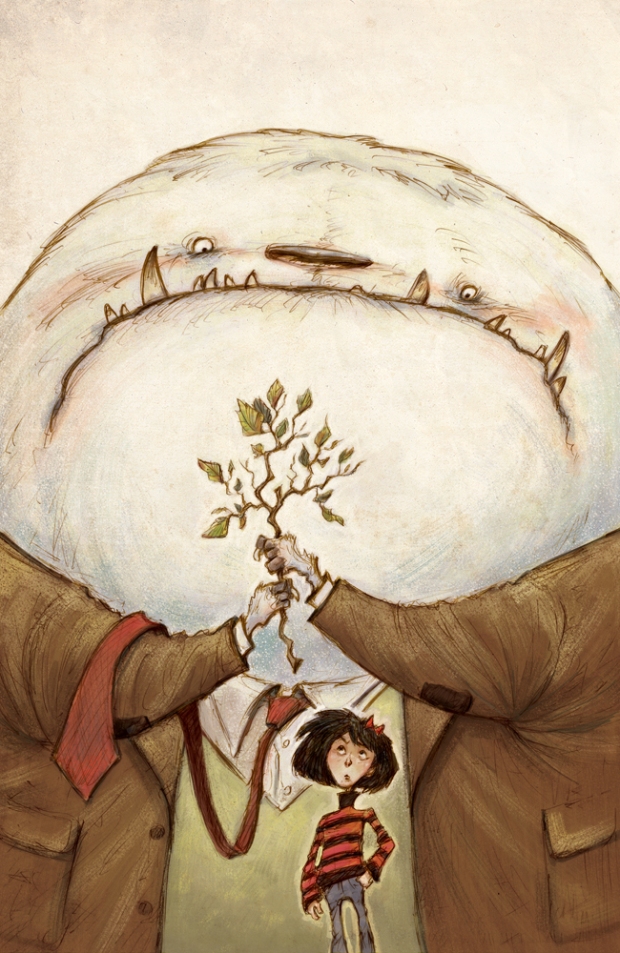 I guess the point of all this is maybe partly about the way the internet has allowed us to connect and work together in ways that would have been a lot more difficult when we were still using faxes and snail mail.

But more than that – Roger’s generosity (and those of many others, from David Mazzuchelli to Robb Mommaerts,  Gene Yang to Aaron McConnell) reminds me of the need to be less solipsistic myself, less caught up in work and deadlines.

To try to always ask:

What Would Alan Rickman Do?

*edit: As it turns out this is a Lie, as Roger remembers : “…it was at the San Diego Comic Con… at a bar across the road from the convention centre, at some Disney-related thing. Charly LaGreca (of the Indie Spinner Rack podcast) introduced us, but it must have been after we’d already done the Spider-Man story, because I recall telling Charly we already “knew” one another through collaborating on that.”