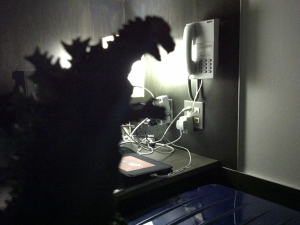 Some Inari for Essential Carbohydrates.

But First, some Beverages.

Which way to Studio Ghibli?

Sandwiches it Shall Be.

Over at the Beat, Heidi MacDonalds says: “A collected edition of MALINKY ROBOT, Sonny Liew’s charming series about two urchins in a city full of giant robots, is coming out in August, and here’s the cover. Liew is the artist of MY FAITH IN FRANKIE, Marvel’s SENSE AND SENSIBILITY, and many other fine comics; he also edited two volumes of the Eisner-nominated LIQUID CITY, the Singapore comics anthology… Liew is a fantastically talented artist; MALINKY ROBOT comes out from Image in August and it’s well worth searching out.”

On Page 45, Stephen says that Malinky Robot has ” a dark humoured but child-like sensibility. If Marc Hempel and Miyazaki collaborated, it would feel very much like this.”

Speaking of Miyazaki, here’s the theme song from my favorite Studio Ghibli movie 🙂

And thanks to Samax at Ghetto Manga for his previews!