The Shadow Hero script was the first I ever worked with with detailed thumbnails already included, and the clarity of pacing, comic timing and general storytelling in Gene‘s layouts were so spot on, most of the time I just had to follow them as they were.

Where there were changes, it usually felt like for-the-sake-of-change rather than any improvement in storytelling.

Same, yet Different, is about all there was :p

In any case, I’d do the revised thumbnails and send them over to Gene and the folks at First Second for approval, and once the go ahead was gotten, it was on to the pencils.

These days, I make a scan of the pencils and print them out on A3 paper – mostly it’s out of Fear of Bad Inking, since it gives me the option of reprinting a page and starting over, rather then the horror of ruining your one and only page of pencils :p 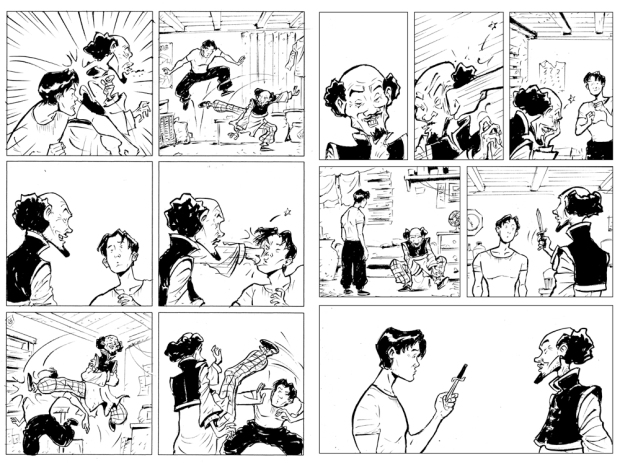 After that it’s the inking…

Then the color flatting (where I had invaluable help from Xueling, Clement and Junjie)

The pages above are from issue 2 of the Shadow Hero, do get your E-copy before they, erm, run out! :p

Some early reviews, including an “A” from the Pullbox  (Myke likes it for the”quality of the script” , “the beautiful and cheery aesthetic and charming plot” and it’s “unique tone and appeal“) and over at Goodreads!