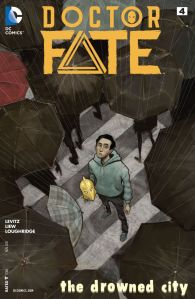 Doctor Fate #4 has hit the stands, some reviews below 🙂 (Also a ComicVine Cover of the Week!)

“The fluidity of [Liew’s] style is mesmerizing, with the layouts and characters’ points of view always deserving of second looks to observe the care taken in creating this book.”

“… I’m loving the more personal approach that Levitz and Liew are taking with it so that it can find its own voice and stand out from that point of view.”

*to be artfully selective :p

“There is a charm and originality to what Levitz and Liew have done reinventing Doctor Fate that for some reason makes this book completely irresistible… Doctor Fate is everything that the DC You relaunch was supposed to be about without any of the garbage that has killed so many other titles before their sixth issues.”

“With well defined characters and a special attention to the sacred and mundane, Doctor Fate #4 is an example of what DC is doing right with DCYou.”

Thoughts on Pixar’s Inside Out: I remember the sheer wonder of the early Pixar movies – Toy Story in particular. Since then they’ve devolved a little into formula; a more sophisticated one than the story arcs that most mainstream animation manage for sure, but it’s that sophistication itself that becomes troubling.

Everything about a Pixar movie is precisely calibrated, even it’s flights of fancy. In Inside Out, the sequence where the characters end up in a realm of Abstract Thought reminded me of the God sequence in Studio 4C’s Mind Games

But whilst the latter left your mind reeling with possibilities, suggested meanings, Pixar’s sequence did exactly what it was intended to do, and no more.

And that extends to the movie as a whole. Part of the wonder of animations like Totoro and Mind Games is the feeling of anarchy, of the meeting of imaginations, an openness. With Inside Out, you might be moved, you’ll laugh, be dazzled – but it’ll be exactly in the same way as everyone else. It’s a sort of contradiction – a studio filled with incredibly imaginative minds, making movies where the wildest imaginings become part of a preconcieved cookie cutter plan.