If you’re wondering about the mysterious “Ben Day” like I was:

“Benday dots are named after printer Benjamin Day and are responsible for the screened dots look that you see in older comics.

What Wally Wood is talking about is commonly referred to ans screentones or zip-a-tone.“

Epigram Books is looking for original comics/graphic novels content so if you have any stories you wanna see published do send them in! 🙂

“Calling all aspiring comics creators! Local independent publisher Epigram Books invites you to submit your manuscripts to be considered for publication.

With support from the Media Development Authority, Epigram Books has published three comics by local creators in 2012—Ten Sticks and One Rice by Oh Yong Hwee and Koh Hong Teng, Monsters, Miracles & Mayonnaise by drewscape and Scenegapore by miel. The Girl Under the Bed by Dave Chua and Xiao Yan and The Art of Charlie Chan Hock Chye by Eisner-nominated Sonny Liew are forthcoming in 2013.

We are especially enthusiastic about work that is set locally and / or reflects a Singaporean or regional perspective. We welcome submissions from both established and first-time creators, and partial manuscripts or detailed book proposals are welcome.

The image in the book itself was too small and low res to read, so I got microfilm versions from the library: 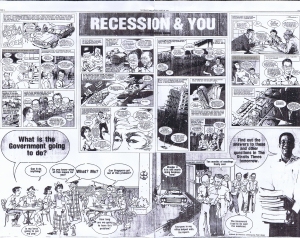 1. The wild, unabashed materialism. “What color Mercedes are we buying? I can’t wait to go to Europe. I want a Lego set!”

2. The prominence given to BG Lee Hsien Loong

I do wonder who the artist(s), Uranium, is though! 🙂

Plus a forum writer’s reaction:

Cover art for a comic (Exact Title Still Pending) with Gene Yang for First Second Books. Inspired by Pulp Comic covers of the 40s and 50s 🙂

Some pages below with lettering by Janice Chiang!